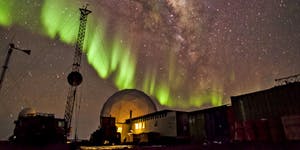 Canterbury Astronomical Society and the University of Canterbury invite you to come and spend and evening with noted photographer Anthony Powell.

Anthony has just spent his tenth winter over in Antarctica. He worked for many years as a telecommunications engineer before becoming a full-time filmmaker and photographer.

He had to design and build a lot of his own camera equipment to withstand the harsh conditions of the deep Antarctic winters adn has made a number of highly acclaimed films of Antarctica.

He made the international award-winning film “Antarctica: A Year on Ice” and has contributed footage to numerous films, TV shows, and exhibitions. These include National Geographic, Discovery, US Natural History Museum, and the Emmy Award winning BBC series Frozen Planet.

Admission by ticket only – Tickets are free for this event.